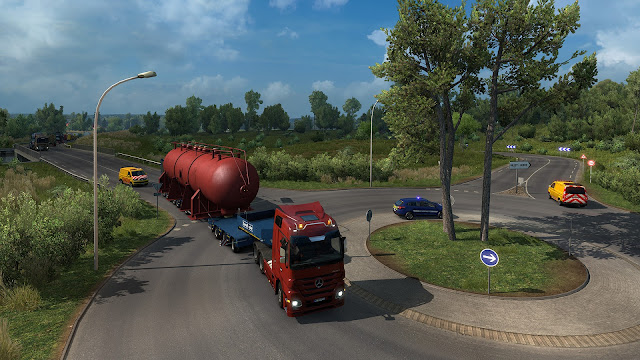 Back in August, Euro Truck Simulator 2 developer SCS Software revealed its next slice of inter-continental DLC was heading for Italy. Now, it's got a new trailer and a launch date: December 5, 2017.

That's next week, but first let's look at those new moving pictures:

Before now, ETS2 players have been able to cruise around certain parts of northern Italy, however the incoming expansion opens up the rest of the picturesque Lo Stivale. That can be seen above, however SCS notes that it plans to apply "cosmetic touches" between now and next week's release.

In doing so, the developer hopes to capture Italy's "rich history, modern industry, traditional architecture, and diverse natural environments" across 11,500 kilometres of new in-game roads. New cities—of which there are 19 in total—include Rome, Napoli and Palermo, and tourists can expect to happen upon familiar landmarks along the way.

"The geography and shape of Italy have led to a comparatively high concentration of cities in the Italia map expansion," so reads the game's Steam page blurb. "Local industries contain, among others, famous places like Carrara marble quarries and Europe‘s largest Steelworks in Taranto."

Paving the way for next week's major map expansion release, here we are with the official Update 1.30 for Euro Truck Simulator 2. We would like to thank everyone for their participation in the Open Beta, your support was awesome as always!

The game should update automatically through Steam. If you have switched to a beta branch, don't forget to opt out now! On the other hand, if you are concerned with mod compatibility and need to stay on the older version of the game for a time, there are still branches available on Steam giving you access to previous game versions. Update for non-Steam legacy edition of the game and VR-compatible beta build of the game may take a few additional days to get ready.